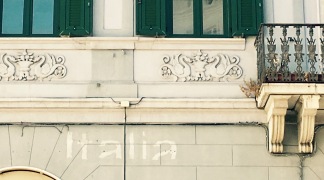 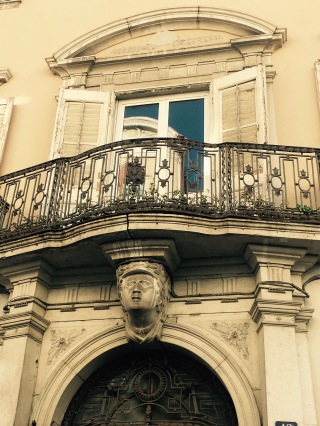 As with previous years, January finds me dreamily perusing last year’s photos and notebooks. There isn’t always time to write while I’m travelling, so in the chill of midwinter, I gladly relive a few of those interesting vignettes. All three of the settings were first-time visits. Oh the joy of unanticipated discoveries! So today, let’s wander back to Italy… 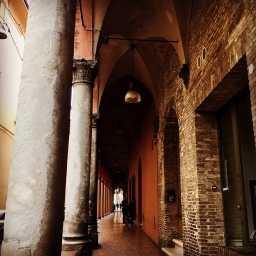 I can’t think why Bologna hadn’t been on my list of Italian cities to visit. It is now perhaps in the top five of my treasured collection.

Why Bologna? It’s quite simple… the towers, the porticoes, and the food.

Let’s begin with the setting – an architectural feast of light and shadows created by kilometre after kilometre of arched walkways. In fact the over thirty-eight kilometres of porticoes (harking back to the porticus of Roman times) which through their varied construction tell stories spanning the ages – from medieval wooden to frescoed renaissance to the austere functionality of post world war II.

They are simply beautiful. Deemed a UNESCO World Heritage Site, I found them entrancing, and useful as the rain dampened the streets late one afternoon. Through their evocative and protecting arch ways, we ‘mazed’ our way to another of the cities’ well-known landmarks, the tallest leaning medieval tower in the world. At over 97 meters tall, the Asinelli Tower tops that of Pisa – I know, it gets all the attention – but with its little sis, Garisenda nestled beside it, these two are excellent examples of tower homes.

Becoming prominent from the pre-Renaissance period, wealthy, feuding families in the 12th and 13th centuries attempted to outbuild each other, for the purpose of defensive and sheer rivalry. Often taking as long as ten years to construct, as many as 180 of these laboriously built ‘homes’ once dotted Bologna’s skyline. By the end of the 1200’s many had collapsed or been dismantled, making these two ‘sister’s that much more valuable. I admit that despite their enduring presence, they don’t quite have the same allure as the leaning tower in Pisa. Yet, their imposing silhouettes surely transport us to a vision of Bologna’s once-soaring skyline. 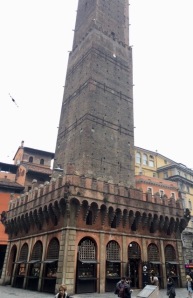 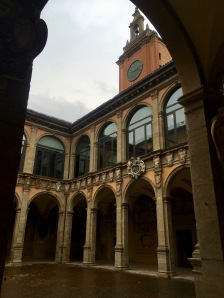 Bologna understands both old… and modern vibrancy. The city boasts the world’s oldest university, rendered new by the young and edgy vibe of student life. Students gather and commune in the squares, under and near the porticoes, and most definitely in the Quadrilatero. This compact area is teeming day and night with market stalls, lavish gourmet deli shops and packed cafes.

After all, Bologna is known as La Grassa, the fat one. To say that it is renowned for its food would be an understatement to the Bolognesi. This is where ragu or bolognese originated. Where delicate pouches of ravioli melt in your mouth. Where the Palazzo della Mercanzia keeps the recipes of Bologna’s world famous dishes under ‘lock and key’. Yes, they are that precious.

So Bologna? An amazing display of porticoes and lively streets – a blend of many centuries. And a veritable feast for both the gastronome and the architectural connoisseur! 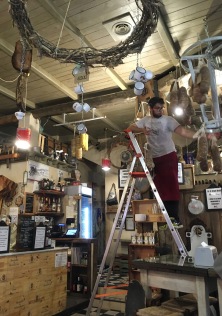 A Lunch Date in Cinque Terre... 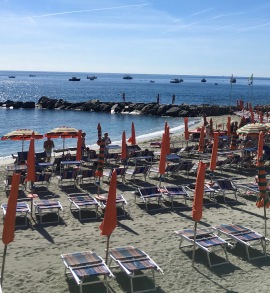 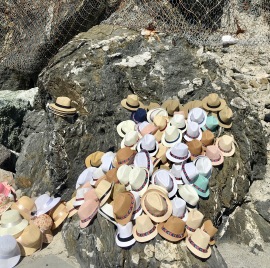 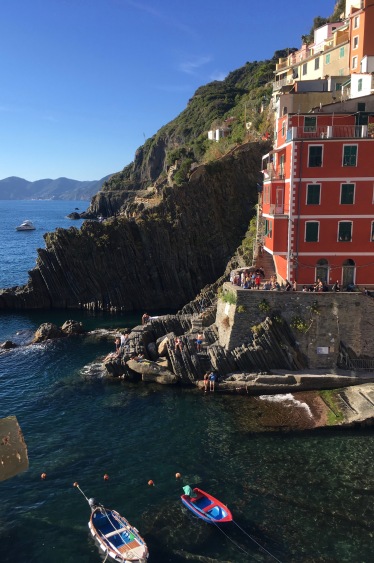 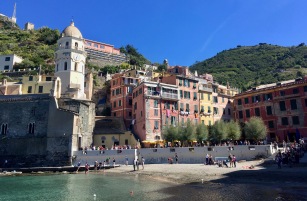 There we were, eight of us on a day trip from our writer’s retreat in Tuscany – let loose in the Cinque Terre (five lands). For many visitors these once isolated villages, strung along the Mediterranean Sea, are a destination for hiking from village to village. We do no such thing.

We jump on the 9:30 train from Aulla, to La Spezia. Then onto the ‘Cinque Terre train’ where we cram toe to toe with day-trippers in sun hats, safari hats, hiking boots and backpacks. Yes, many are doing ‘the hike’ a pilgrimage of sorts, but we were definitely the ‘merry writers on excursion’. As the crowded train whisks through the countryside, we catch brief glimpses of tall cypresses against country villas, castles clinging to hilltops, and then finally, of the dazzling Mediterranean. It was official – we had arrived at the Italian Riviera.

We alight at Monterosso and soon cozy-up at an outdoor cafe. Soaking in the shimmering sea, we order our first espressos of the day. We watch loungers and bathers claim their spots under paint-box-orange and Italian-green umbrellas. We, on the other hand, wander. A hat for all is in order and carefully chosen. Then we embark upon a slow, picturesque stroll along an ancient via. It meanders, and along with prickly pears and milky-green olive trees, it clings precariously to the hillside. The emerald-green-turquoise-saphire-blue water fans out below us like a rich, shimmering fabric. Being writers, we ponder… surely there must be a word for such a brilliant colour. None is conjured!

We hop onto a short ferry ride to Vernazza, which despite swarms of tourists and cruise ship passengers, still feels authentic and genuine. It’s an old sea-faring town with car-free, narrow lanes snaking upwards, fringed with mountainside vineyards just beyond the small settlement.

We join the fray in the busy piazza. It is seemingly laundry day, townfolk’s washing hanging from tall, peeling and faded pastel homes. As in Venice, the port’s water once lapped against the houses themselves, but now this main square folds down to the water; a beach, an impromptu soccer field, a place for passiagetta, the evening ritual of strolling. 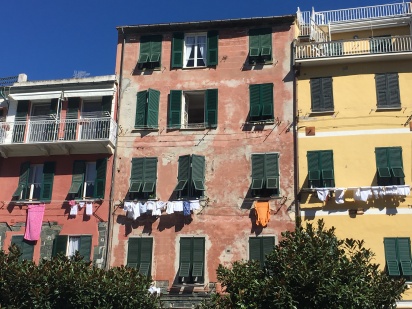 It’s time for a late lunch and Roberto, our favourite Italian guy and in our group, manages to secure us a table at a restaurant with a view, Ristorante Gambio Rosso. It is ideally located on the square… allowing us to gaze out to the small inlet, to the crowds and up to the floating laundry. Now Roberto, our ‘gentleman on tour’, becomes our unofficial translator as we navigate the menu. We then dine in sheer pleasure. It is the scrumptious food, refreshing local wine and glorious company over a luxurious long lunch. Allore, it was surely a mix of the right place and the excellent company of ‘merry writers’.

The Cinque Terre –  and especially Vernazza – claimed a little of our hearts that day.

Trieste… of the grand, of light on pastel 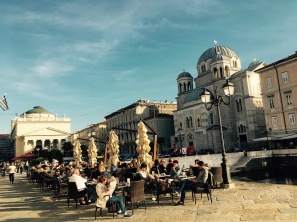 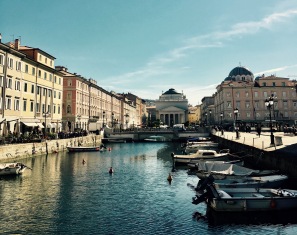 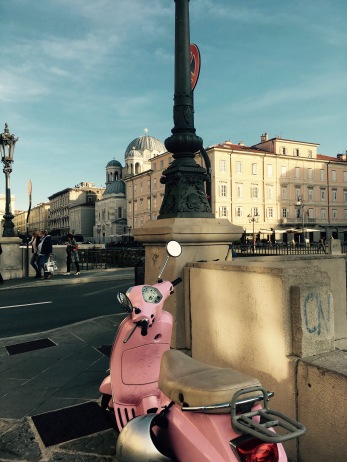 Trieste? Yet another unexpected delight hints that there will be yet more to find. Head north, past Venice, 150km onwards, to the very eastern top of Italy’s ‘boot’. Nestled at the foot of the mountains, on the Gulf of Trieste, this once prosperous seaport was one of the oldest cities of the Austro-Hungarian Empire. Today, it feels a little like Vienna, or Salzburg with stately opulent buildings, many that harken back to the days of mighty shipping companies.

We explore endlessly, we eat often, and sometimes we hide in neighbourhood bars from that wind – the north-easterly bora – racing briskly up the Adriatic. In one, I taste the sweetest, thickest, most delicious hot chocolate I already know I’ll ever savour. It’s barely noon, but the bar is busy. A place where wine and beer already flows and where the daily paper is ritually digested.

When the sun comes out, Trieste is full of light dancing on pastel-hued buildings. Its grand square is simply resplendent. I’m taken aback at how ‘unItalian’ it feels. But then this storied city has always been at the crossroads of Latin, Slavic and Germanic cultures.

We also explore the coast in a little Fiat, grand castles and hillside villages dotted along this narrow ribbon of land between mountain ridge and the azure sea.

Our stay is brief; in fact, we’re on our way to Slovenia to visit our son and his girlfriend. So Trieste… what can I say. Simply splendid that we happened to be passing through! 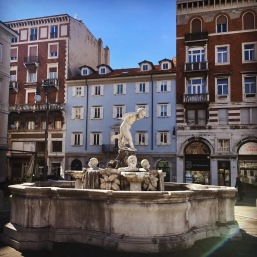 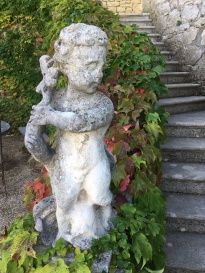 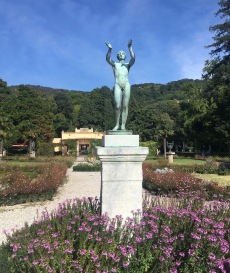