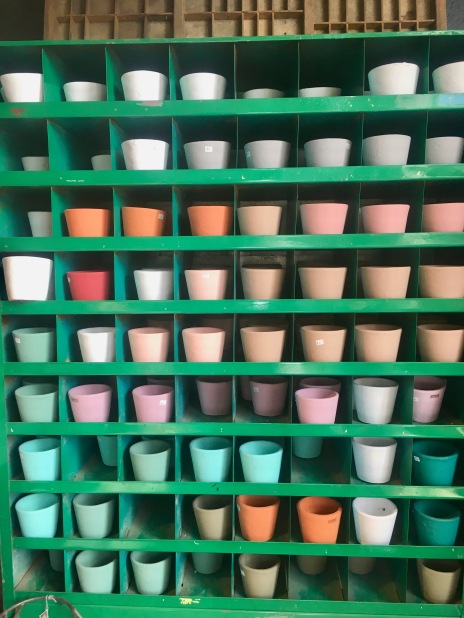 We often talk about putting colour in our lives, enjoying colourful characters, revelling in the vibrancy of autumn colours… so it’s little surprise that the absence of colour can leave us searching.

For the first time in more than twenty years I spent a full winter in Canada and in the process, it seemed almost like a re-learning of what it was to yearn for colour. Beyond the whites and blues that dominated my vistas – and yes the rosy hues of the alpenglow on the mountain peaks are always spectacular – I longed for splashes of primary colours. Oh give me greens, blues and yellows, pops of red, maybe even a dash of ‘bird of paradise’ orange!

After experiencing five months of continuous snow and sub-zero temperatures, I’ve concluded, I’m not a true winter-connoisseur. As the days fused into a continuum of meagre chromatic tones, I found my mind wandering endlessly back to India. At this time last year, our posting in Bangalore was coming to an end and I knew that I could never replace the vivid colours of my daily life there – the vibrant sarees, the exotic fruit piled high on vegetable carts, the canopy of lush greens that was the backdrop for our apartment. And so through those long winter months I felt bereft of colour, almost starved, as if it were nourishment for my soul. 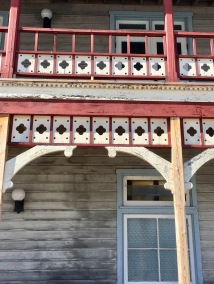 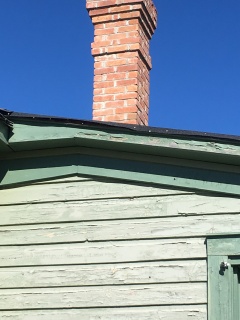 Impatient for the promise of an early spring to deliver me, I began in earnest to seek out colour. On a bright sunny afternoon we visited Fort Steele, a heritage village nestled against the Rocky Mountains. The aged wooden buildings seemed to be making a grand entrance to the new season, the still snow-draped mountains  providing the perfect framing for their subtle colours. At this time of year, Fort Steele is still absent of its summer crowds, the silence seeming only to enhance the simple washes of colour, the nuances of gentle palettes. 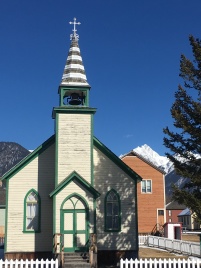 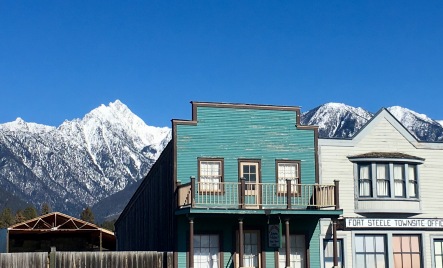 A week later, a trip to Vancouver confirmed that, at least on the coast, spring had most definitely sprung… budding crocuses and darling daffodils announced the re-birth of colour. On Granville Island, I soaked in bursts of peony pink, carrot orange, and radish red. There were vivid blues and yellows. I found shadows on walls and textures on lights. Even the sky swirled its own evocative design with soft, billowy clouds. I gratefully extracted sustenance and delight from every play of warmth. 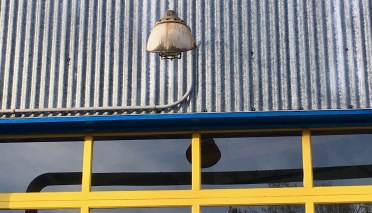 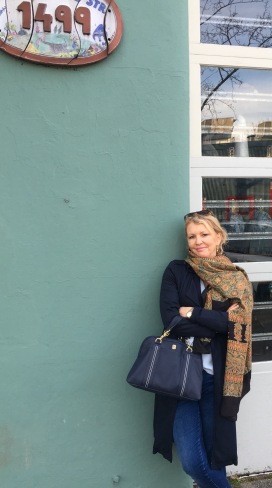 Then this past weekend, perhaps it wasn’t surprising that I found myself in Calgary attending a lecture/conversation where colour was very much the topic.

Jason Logan is a modern day urban forager, with a very specific cause. An individual with a unique perspective on the hidden bounties of the city. His purpose, quite simply, is to make ink. His book, MAKE INK, A Foragers Guide to Natural Ink Making, chronicles his surprising and delightful endeavours.

Jason’s bespoke palettes of ink practically burst off the pages and I can only imagine how vibrant they must be in real life. Their names more than hint at their origins… evocative concoctions like Hawaiian turmeric, sap green, carbon black, black walnut, wild grape purple and acorn cap silver.

“It all started with a black walnut tree,” Jason told the audience at Calgary’s stately Memorial Park Library. Years ago, he had quickly used up a purchased bottle of ‘black walnut ink’ while working as an illustrator in New York. He loved the texture, the depth of the colour and rapidly filled up an entire sketchbook with the mahogany-black hue. But when Jason tried to replenish his supply, he found the ink maker had stopped producing black walnut ink. 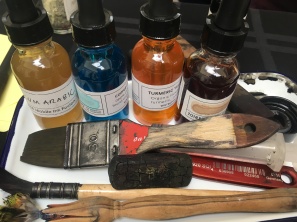 Seven years later and now back in Toronto with a young family, Jason’s daily cycle to work took him past a beautiful aged tree. Discovering it to be a black walnut tree, he waited not so patiently as the tree’s bounty of nuts slowly matured into green hulls. When they shed in late September, Jason soon had them boiling into a rich brown ink in his kitchen. After repeated tweaking of the recipe, he was hooked.

His passion has translated into the Toronto Ink Company, and he now takes plants, roots, berries, metal, gypsum, weeds, in fact whatever he may find in a specific city, to create inks evocative of a specific area.

The day after his lecture, I noticed on Instagram that Jason had foraged in Calgary as well. ‘Paint chips of Calgary: pried off of a cement block in the Paliser Parkade, the CN bridge downtown, a rusty pipe near the Bow and Elbow rivers, an old Toronto Sun newspaper box in the East Village and the underside of a bridge.’ The colours were luscious and will no doubt reveal themselves as they’re transformed into a bottle of ‘Calgary Ink’.

One of Jason’s clients and confidantes is Canadian author Michael Ondaatje, author of The English Patient. In MAKE INK, the two creatives discuss shellac, the necessary binder for ink.

Jason comments, “The shellac that I buy comes from these little beetles from a bush in the high mountains in India. Almost everything I make, I make from the streets of Toronto, except the shellac. I would at least like to meet those little beetles.”

“The first creature I remember very vividly is called the golden beetle in Sri Lanka. It was sacred,” Michael Ondaatje replies. The ink maker confirms that, “Beetles strangely play a really important role in pigment and ink.”

Their conversation meanders to beetles that live on prickly pear cactus feasting on the purple magenta syrup, to the ‘witchy relationship’ the English have with herbs and the dyeing of wool, to making ink from ancient lichen, rust, bone, wood, land and quinine all of which pay homage to the Franklin Expedition, the doomed British Arctic endeavour of 1845.

I find it original and fascinating; Jason’s mantra, ‘Colour is Everywhere’, rings true. During the presentation, there is an earthy, visceral, almost elemental, passion that comes through as he speaks. He tells us that his inks are fugitive; they’re alive, they change, even in their fading there is poignancy.

“They’re an intensification of colour that can be used in communication. It’s democratic, anyone can play. Maybe a fine line of a pen. And with a brush, it loses its mind!”

As I publish this post, I find myself in Spain. We’ve begun some months of traveling and yesterday I was reminded of how wonderfully a town can ‘lose its mind’. On the Costa Blanca lies a delightful town, like a colourful box of pencil crayons… La Vila Joiosa 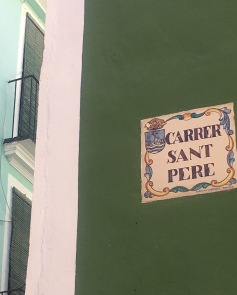 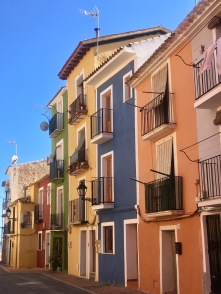 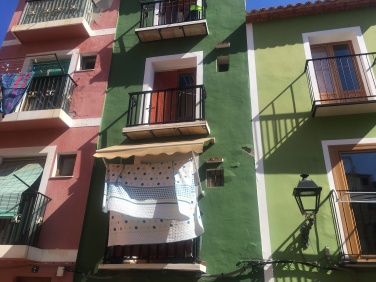 This once small fishing village is awash with colour, across the full spectrum of the rainbow. Its name means ‘jewelled town’ and the vibrant colours were traditionally intended to guide local fishermen home from the sea. Narrow, centuries-old houses lean against each other, each distinctly hued. Shades of powder and cobalt blues, reds, pale lavenders, ochres and mustard yellows and seaside greens. Imagine selecting a handful of your favourite pencil crayons and living amongst them… it’s fanciful and alive.

I was here a number of years ago, and it’s just as beguiling and nourishing as I remember it. My yearning for colour has absolutely been fulfilled! 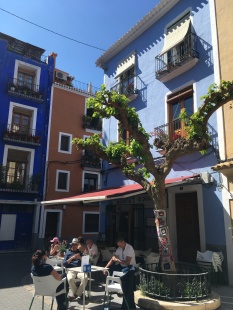 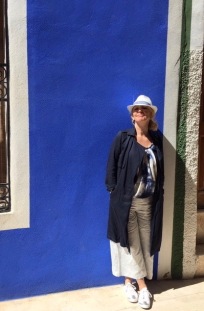 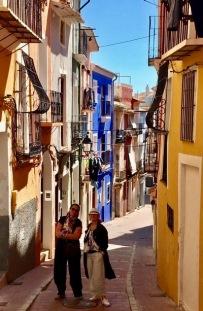